Movies / Music / New York City / Out and About 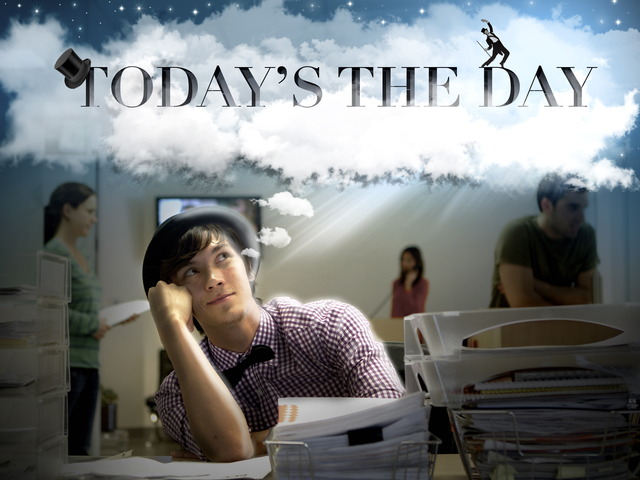 “Today’s the Day”, a short film written and directed by Daniel “Cloud” Campos, has finally arrived! An entertaining film that harkens back to days gone by when the likes of Gene Kelly and Fred Astaire beautifully balanced both acrobatic, eye-catching dance moves with infectious, unforgettable tunes, and now Cloud has officially joined their club.

Described as, “a light, warm-hearted, feel good film” about, “standing up against insecurity, doubt and fear”, I finally received the chance to see it back in April at the Tribeca Film Festival, as it was chosen from amongst hundreds of other submissions to be part of a series of short films. I was super excited to finally get the chance to view the film I’d heard so much about, and even more excited at the prospect of finally being able to meet someone whose work I’ve admired for so long, but as luck would have it he unfortunately could not attend the showing in which I did.

I still had a wonderful time! I’d never been to the Tribeca Film Fest before and it was such a great experience to witness so many other people’s dreams coming true. Cloud even tweeted out an apology for us not being able to meet after I first tweeted out how bummed I was to have missed out on the opportunity. He’s one cool dude.

The only photo I managed to snag that day

If you’ve turned on the TV within the past year, chances are you’ve seen something he’s either starred in, directed, choreographed, written, animated, composed, produced or all of the above! From making appearances in Windows Surface Pro commercials to doing his very own Tedx talk entitled, “Embrace Your Fears,” in which he speaks about having to do just that by accepting to do this Ted Talk in the first place, to helping to choreograph the Michael Jackson Cirque du Soleil show, “Immortal”, he truly is one busy person! I can’t even tell you the number of times I’ve found myself just stumbling across his work without even knowing that he was even part of it to begin with!

Originally known for being a B-Boy (Break Boy) and dancer for Madonna’s Confession Tour, he and his wife, Tamara Levinson Campos, also a dancer on the Confession Tour and former U.S. Olympian, both constantly collaborate on creative projects. They wrote and choreographed “Today’s the Day” together and made it all happen by starting a Kickstarter project to raise $25,000, a goal they not only reached, but surpassed, in just a day or two! That just shows goes to show much people support and believe in what they create.

Watching “Today’s the Day”, I could see his passion radiating through the screen. It was amazing to see all of their hard work come to fruition, as I’m sure the process to get there was not the easiest. The film was autobiographical, in a sense, because like his character in the film, Cloud never gave up on his dream of making it all happen. As he states in the film, dance, “is the only thing I look forward to when I wake up every morning. Because…it gives my life purpose. It gives it meaning. And to live a life chasing after the only thing I’m passionate about, what better life is there to live?” And I couldn’t agree more! This philosophy could be applied to so many other facets in life and reinforces the old-age lesson of never giving up on your dreams or letting fear get in your way.

He has a respect for his fans and they absolutely love and respect him back, as the tweets below clearly demonstrate and I definitely look forward to what he has is store next!

So Cloud, if you ever do read this, just know that I, too, am a fan for life. Keep up the great work!

Check out “Today’s the Day” here: