Food Friends New York City Out and About

Momos are dumplings native to Tibet and Nepal and are filled with either a form of minced meat or some type of veggie (yummy and are good for you? Win-Win!)

I’d only recently heard about these over this past summer when my sister and I visited a surprisingly delicious Indian/Nepalese restaurant in the heart of Amish Country called Himalayan Curry & Grill. I’d gone with the traditional Indian Curry, but my sis, wanting to be a little adventurous that night, ordered a plate of the Nepali Momos and the rest is history. They were soft on the outside and burst with flavor on the inside, and we were hooked from the first bite.

Participants of the crawl were instructed to meet Jeff Orlick, also known as the Queens Questodian, at the Jackson Heights Food Court marquee to receive a (hand drawn) map in exchange for 3 bills of any denomination. The 20 participating locations were marked on the map, with each momo costing $1 a piece (a price that had some outraged).

One of the things that I liked about this crawl is that it wasn’t solely delegated to restaurants, and that both food trucks and food carts could participate and make a profit as well.

It has also helped raise awareness for this type of cuisine and to the Jackson Heights area so that hopefully people will continue to come back and support these local businesses.

There was an amazing turnout with lines streaming out the doors and onto the streets and waits up to 10 minutes for a single momo. There was even a fun challenge at a restaurant called GangJong Kitchen, where if you could still whistle after sampling chef Tenzin’s super spicy hot sauce with your momo, you could win a dinner for 2. I didn’t make an attempt, but did witness some other brave soul giving it a go who claimed it wasn’t that bad (although I bet he said that just to save face haha.)

At the end of the crawl, everyone was told to meet back at the starting point to vote for the winner of the Momo Trophy, but as the lines – and our hunger – continued to grow, we decided we’d had enough momos for the day and didn’t get a chance to see who’d taken the grand prize. I don’t even think I could’ve voted for a single one because the ones we did get to try were all so delicious, but apparently Tibetan Mobile AKA Lhasa Fast Food won by a single vote followed by Little Tibet, with GangJong bringing up the rear.

We continued on to a place in Elmhurst Queens called Pho Bac, where for the first time I tried Vietnamese Pho, a type of noodle soup with thinly cut slices of chicken or rare beef  (that continue to cook in the broth), herbs, and a variety of vegetables.

Being that my friends seemed to be pho connoisseurs, I asked multiple questions like, “How is this properly eaten? Do I put the extra sauces (like hoisin and sriracha) in the broth or just dip the noodles into it as I go? Am I supposed to finish all of the broth or is it customary to leave it behind?” which may have seemed silly, but I truly wanted to learn and also be respectful to another culture’s cuisine. Anyhow, I would definitely say that it was un-pho-gettable, pho sure.

So if you’re craving dumplings (or pho!) and don’t know where to visit, taking a trip out to Queens may just be what you’re looking for (or should I say ‘pho’? Haha!)

What is the id NYC? 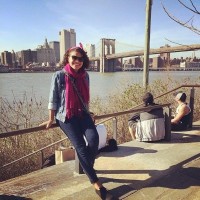